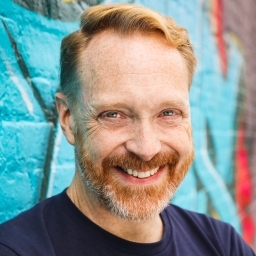 Kevin Allison
Author/Director/Storytelling Coach/Mentor
Storytelling Coaching
Public Speaking Training
Guided Meditations
Life Coaching (Sex & Kink Education, Creativity)
Book a Meeting
$100
Schedule a 1:1 video call
Coaching on Personal Storytelling for Stage Performance: Short Session - 30 minutes
Book a Meeting
Ask a Question
$39
Personal video answer to your question
Ask Me Anything!
Ask a Question
Meetings on Pensight
Book
Find an available time and book it right away
Talk
Have a 1:1 video call directly in your browser
Questions on Pensight
Ask
Send a message or submit a short video
Receive
Get a personal video answer to your question
What others say? (9)
Tom G.
Kevin is a great coach! I forgot that I had met with him a number of years ago and he remembered ( or kept a good record ) of some of the issues we talked about back then. Amazing! Great listener! Great advice!...
Silviana
Kevin Allison is a wonderful person, and truly an expert at helping people find their story. He listens, he responds honestly and from the heart. I recommend talking with Kevin, 100%....
Noemi L.
This story coaching with Kevin was great, so useful and at the same time so much fun. Thank you!...
Julie M.
Kevin provided me with so much great insight. It is enough to give me the confidence to cross the threshold into actually doing what I've been dreaming of doing for a long time: putting on storytelling events in my town....
Julie H.
I booked an hour with Kevin, as I needed advice on leading storytelling sessions. Kevin immediately got into it and answered all of my questions. He's helpful and knows his shit. Definitely worth it!...
Adam
Kevin's experience working with so many interesting people, doing so many interesting things, and naturally being an understanding and insightful person will benefit you greatly if you know what you want out of the meeting....
Chelsea
My one hour Storytelling meeting with Kevin was more productive and supportive than many of the hours I’ve spent with my therapists or my journal. We effortlessly touched on everything I set out to (which was a tall order), he made me feel seen and heard, and he provided a wealth of resources and direction to move forward. Seriously, if you have the inkling, take the Risk!...
Karl D.
Kevin was insightful and supportive of my idea and how to grow it. Really helped to share it to someone who's been there and done it....
Suzanne
Great storytelling and writing tips!...
About

I help people to tell stories about the most meaningful moments in their lives and to live more adventurously and authentically. Together, we can revisit and recreate the peaks and valleys of your journey, so that you can share about them publicly, in ways that will move and motivate others.

For over ten years, I have been the Founder and Owner of one of the world's most acclaimed, long-standing, and ever more popular storytelling and podcast platforms, RISK! The RISK! podcast has been lauded by The New York Times, Slate, and New York Magazine for its life-changing personal stories and gets over one million downloads each month. The RISK! live show has toured to sold-out audiences in over 45 cities and counting, in the U.S. and abroad.

Through the true storytelling school that I founded, The Story Studio, I've trained hundreds of people in the art of communicating about their lives, careers and work projects in unforgettable ways that produce results. I created a proven method for applying easy-to-learn, practical techniques for crafting dynamic and compelling narratives. Some of our past clients at The Story Studio include Google, Pfizer, Citibank, American Express, and Ernst & Young.

I have spent many years studying the crafts of hypnosis, meditation, and journaling -- techniques that I often incorporate in my coaching. I have also spent ten years teaching and/or attending workshops in the BDSM/kink community and have mentored many newcomers in their personal journeys in that realm.

As an actor, I have appeared on The State on MTV, Reno 911! on Comedy Central, High Maintenance and Flight of the Conchords on HBO, and Comedy Bang Bang on IFC. In 2007-2008, I served as the Artistic Director of The Peoples Improv Theater in New York City and have directed many theater productions since graduating from the Tisch School of the Arts at NYU.

If you're looking to work on your public speaking skills, prepare for a particular speech, presentation or performance, figure out how to tell a true story from your life, or get guidance on podcasting, presenting live shows or exploring new areas of your personal or professional life, let's schedule a time to talk.