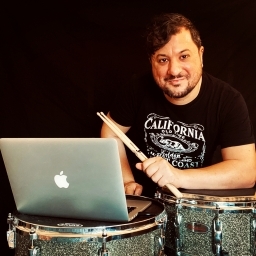 Riccardo Merlini
Professional Drummer and Teacher
Drummer
Drum Teacher
Drum Performer
Book a Meeting
$28
Schedule a 1:1 video call
30 minutes
Book a Meeting
Ask a Question
Personal video answer to your question
Riccardo Merlini does not currently accept questions on Pensight but you can show your interest!
Meetings on Pensight
Book
Find an available time and book it right away
Talk
Have a 1:1 video call directly in your browser
Questions on Pensight
Ask
Send a message or submit a short video
Receive
Get a personal video answer to your question
About

Italian drummer, fastest hands on the planet, graduated at Conservatory, student of Mike Mangini in Boston, teacher, clinician, world fastest drummer drummer awarded who discovered and developed the fastest hands technique for a human being reaching 400BPM with single stroke roll with drum sticks and 300BPM bare hands. Drummers from all over the world studies with Riccardo like superstar percussionist Eric Bobo of Cypress Hill study, Mike Reid (drummer for Janet Jackson, Rhianna) and many others from around the world.

My technique is very useful and teachable to anyone from the first approach and it's very useful for every kind of expression and style on the drum set or percussions. It helps to reach more flexibility  of wrist and fingers. Developing right movements for a better control and grip functionality.